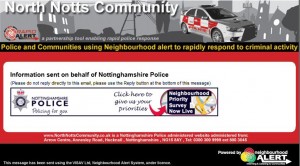 Police Officers from East Bassetlaw have seized two large off road vehicles in the last 3 weeks as a result of reports of crop damage by offenders who had driven those vehicles on farmers land and caused damage to crops as a result. Harworth Police officers are currently investigating several such incidents and further seizures are likely in the future.

The seized vehicles will, where possible, be kept pending any court case and an application to the courts is to be made for those vehicles to be forfeited.

Local farmers are working alongside the Police in order to both prevent these issues, and identify those vehicles used in such a way.

Offenders using vehicles in this manner run the risk of losing, what may be their only form of transport, with a confiscation order meaning they lose that vehicle for good.

Anyone with information of persons and or vehicles used in such a manner, can contact their local Police officer via the Nottinghamshire Police web site. Alternatively Crimestoppers can be contacted on 0800 555 111.

We want to help you stay safe in the hot weather, so please follow our safety advice🔥 Don't have garden fires🔥 Pack a picnic and leave the BBQs at home🔥 Dispose of cigarettes carefully and appropriately 🔥 Always take home your glass litter📸 Bingham Fire Station ... See MoreSee Less

ℹ️ UPDATE | We are still on scene at Ranskill but with two fire engines. One fire crew is actively firefighting and salvaging property, with the help of nearby businesses. The other crew is creating fire breaks to prevent the spread and protect the surrounding environment.There is still a significant smoke plume which is blowing towards Ranskill and the train line. Trains have been asked to reduce their speed and residents should keep windows and doors closed if they see or smell smoke.The site is partly operational and we have worked to support those affected along with BT and Western Power.We expect to be here for several more days making the area safe.The support we have received from the local community has been incredible and we would like to thank everyone who has shown their support to us.We will do all we can to keep you safe. ... See MoreSee Less

The form is minimized