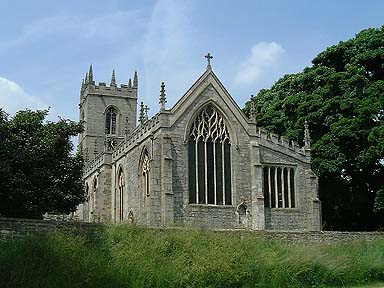 The church of St Bartholomew is around 900 years old, and resides in the Diocese of Southwell & Nottingham.

The church also has its own Facebook page, which you can find here.

Parish church, C12, C14, C15,restored 1857. Ashlar with some coursed rubble with single ridge, nave, chancel and porch crosses. Buttressed and set on a moulded plinth with a string course running over. Tower, nave, north aisle and chapel, chancel and south porch. The angle buttressed tower of base and
2 stages has a C15 arched 3-light west window with panel tracery. There is a hoodmould over and a string course under.

The bell chamber has 4 C15 2-light arched openings each with panel tracery, cusping, hoodmould and label stops. The tower is embattled with 8 crocketed pinnacles. Guttering runs under, having 2 gargoyles to each side. Under the south and east bell chamber openings are single C20 clock faces. There is a single small rectangular light to the south wall, with 3 similar to the west. The angle buttressed and embattled north aisle has in the west wall a single window with 2 arched lights under a flat head.

The north wall has a chamfered arched doorway and 4 windows, each with 3 lights under a flat head. The eastern most 3 are in smaller openings and were probably once arched. The angle buttressed east wall has a single window with 5 arched lights under a flat head. At the angle is a crocketed pinnacle. The east chancel has a large restored C14 arched 5-light window with elaborate and fine curvilinear tracery with cusping. Over is a hoodmould and label stops. To the right, above the string course, is a niche with cusped ogee arch. Over is a hoodmould with label stops and crocketed finial. The parapet has corner crocketed pinnacles.

The south wall is embattled with 6 crocketed pinnacles. The guttering has small gargoyles. The south chancel has 2 restored C14 arched 3-light windows with fine curvilinear tracery with cusping, hoodmoulds and label stops. In the centre is an arched doorway with open cusped tracery under the arch decorated with 2 foliate carved orbs, with hoodmould and label stops over. The south nave has 2 restored C14 arched 3-light windows with tracery, cusping, hoodmoulds and label stops. The buttressed and embattled south porch has crocketed pinnacles at the angles, with single similar pinnacles to the east and west walls. There is a double chamfered arch with moulded imposts and hoodmould with label stops over.

The interior roof of stone is supported on transverse arches. The inner doorway, originally taller, narrower and arched, now has a flat head with late C15 wooden door with blind tracery. Interior. A 3 bay arcade with octagonal piers, plain moulded capitals, double chamfered arches and responds separates nave and aisle. There is a double chamfered tower arch, the inner arch being supported on corbels.

The restored C12 moulded chancel arch is supported either side on 2 engaged shafts with scalloped capitals. Between north aisle and north chapel is a section of a chamfered arch, supported at the north by a single capital upon a corbel. Chancel and north chapel are separated by a 3 bay arcade of octagonal columns with plain moulded capitals supporting double chamfered arches. In the south chancel wall is a tripartite sedilia and piscina, each with arch over.

The east wall has a small corbel for a statue.

In the south wall of the north chapel is an arched niche, in the north wall is a horizontal rectangular niche and a C14 tomb recess under a cusped and sub-cusped ogee arch, with hoodmould, label stops and finial over. Rising from the stops are single shafts with foliate decorated finials. In the eastern most arcade bay of the chancel is an early C16 screen. There are similarly designed later screens under the tower arch between the north aisle and north chapel and in the western most bay of the chancel arcade. There are several late C15 pews with blind tracery and poppy heads. In the chancel are 2 early C17 carved oak benches and a carved chair. In the nave is a C15 oak almsbox and a heavy C15 oak chest, both with ironwork. The font and pulpit are both C19.

On the north aisle wall is a monument to John D’Arcy Clark, 1838. With a swag on the apron and an urn on the crown. There is a similar one, 1842 to George Clark. The south chancel wall has a monument by J. H. Worth, Retford. In the tower is a hatchment donated by Sir Kay Ed. Cookson, 1799 and an alms board.

The Anglican parish register dates from 1538 and is in good condition.

The church was in the No. 1. deanery of Retford.

The Independents had a chapel in Sutton township built in 1816.

The Wesleyan Methodists had a chapel in Lound township built in 1834.

The Primitive Methodists had a chapel by 1881.

Enquiries for Baptisms, Weddings, Banns of Marriage, etc for St Bartholomew’s Church should be made to church@suttoncumlound.net.

Bell Ringing at the Church 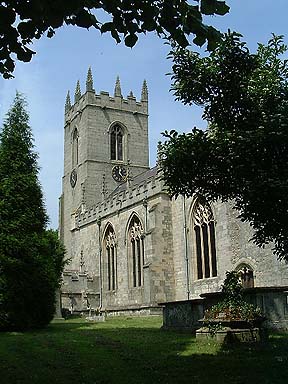 The Bells of St Bartholomew

The bells were augmented from six to eight during 1998 by Fred Pembleton.

The two additional bells are inscribed:

GIVEN BY THE SOUTHWELL DIOCESAN GUILD OF CHURCH BELL RINGERS TO MARK THE 50TH ANNIVERSARY OF ITS FOUNDATION.

IN MEMORY OF ARTHUR AND MARY BIRKETT LOVINGLY REMEMBERED BY THEIR SON BRYAN.

Don’t forget, if you have any event or item of interest for the village, just email it to webmaster@suttoncumlound.net and our resident website monitor will do his best to accomodate you. All posts go out to our increasing list of email update subscribers as soon as they’re published.

Subscribe for email updates and get all the latest news straight to your inbox.

The Parish Council has organised a meeting to look for volunteers to help organise a weekend of celebrations in aid of the The Queen's Platinum Jubilee Celebrations between the 2nd and 5th June 2022.The NEXT meeting is scheduled for Thursday 3rd February 2022 at 7:00pm in Sutton Village Hall. #HRHTheQueen #PlatinumJubilee ... See MoreSee Less

The Parish Council has organised a meeting to look for volunteers to help organise a weekend of cele...
View on Facebook