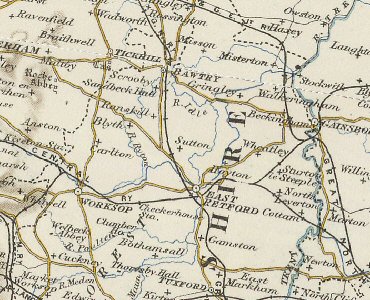 In addition to the Anglican Church of St Bartholomew:

The Parish School (later a National School) was built between the two townships in 1783.

Sitting adjacent to the parish church of St Bartholomew, Sutton Manor is built in the arts and craft style and is believed to have been built circa 1892 replacing the Dutch-gabled Elizabethan mansion which burnt down in 1890. It is likely that the out-buildings pre-date the house that currently exists.

Sutton Manor was built by local workers for the last Duke of Portland’s father as a hunting lodge for his travels from the Welbeck to the Worksop estates.

As you can imagine with the COVID-19 outbreak and the fact that Reverend Cora will be leaving us at the end of this month, things are up in the air at the moment.

The service due on 26th July will now be a joint one in the car park at Scofton church, so please be aware of this change. The service begins at 11:00am.

As you can imagine with the COVID-19 outbreak and the fact that Reverend Cora will be leaving us at the end of this month, things are up in the air at the momen

Because we have a slightly higher Covid-19 rate in Bassetlaw than other areas of Notts (but still low compared to other areas of the country) we will be getting some extra support with testing. This is a proactive approach and is nothing to be worried about.

If you have coronavirus symptoms book a test at the Mobile Test Unit based at Central Avenue car park in Worksop (S80 1EW) from Monday 13 July.

The right hand side of Central Avenue Car Park in Worksop will be closed from Monday 13th July, re-opening on Thursday 16th July. We would be grateful if motorists could park on the left hand side of the car park from Sunday 12th July. This to allow set up for the Mobile Test Unit in the Car Park.” … See MoreSee Less

Please help us to protect our bin crews and your fellow residents by disposing of your PPE in the right way?

St Bartholomew’s Church is preparing to reopen for services. The risk assessment has been completed and although you will find services are a little different to what you are used to we will be opening for worship at 9:15am on Sunday 12th July 2020.

Hope to see you there.

St Bartholomew’s Church is preparing to reopen for services. The risk assessment has been completed and although you will find services are a little different

WATCH OUT – COVID-19’s STILL ABOUT!
Pubs, hairdressers, and others may be opening this weekend but Coronavirus is still about. As a nation, we have lost more people than the population of Worksop, so everybody still has to do their bit. Doncaster is on the brink of another spike, so we’re handily located between the two.

Public Health Nottinghamshire says we can all help to control the virus if we all stay alert. This means you must:

– stay at home as much as possible
– work from home if you can
– limit contact with other people
– keep your distance if you go out (2m apart where possible)
– wash your hands regularly.

Do not leave home if you or anyone in your household has symptoms. If you have symptoms of Coronavirus (COVID-19), you can ask for a free test to check if you have the virus. You can do that here: www.nhs.uk/ask-for-a-coronavirus-test or by ringing 119. If you need medical advice about symptoms of Coronavirus, or health concerns of any sort, you can ring NHS 111. … See MoreSee Less

You can ask for a test if you or someone you live with has coronavirus symptoms.