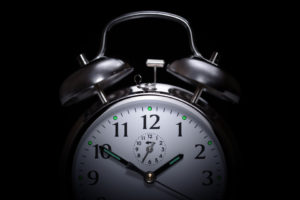 This year, 31st March marks the start of British Summer Time and clocks will go forward by one hour – meaning that there’s more daylight in the evenings and less in the mornings.

What time do the clocks change?

On Sunday 31st March at 1:00am in the morning, the clocks will go forward one hour, signalling the start of British Summer Time (BST).

This will mean getting a whole hour less in bed but will mean that there will be more daylight in the evenings.

Thankfully many devices that are connected to the internet like tablets and phones will automatically update to the new time, but it is best to check to avoid getting caught out!

NOTE: The European Parliament has voted to end daylight saving time in EU member states, a practice that became law back in 1996. The biannual clock changes will come to an end in 2021 when individual member states will be able to decide whether they will remain on winter time or summer time permanently. At this point in time it’s unclear what the UK will do.

What is the history of British Summer Time?

Daylight Saving Time was created by William Willett in 1907 in a bid to stop people wasting valuable hours of light in the summer months.

By setting the clocks back in winter, Brits get an earlier sunrise and earlier sunset.

In summer the sun rises and sets one hour later than it would without daylight saving.

In a pamphlet called “The Waste of Daylight” Willett suggested clocks should be advanced by 80 minutes over four stages in April, and reversed the same way in September.

Germany became the first country to adopt the clock-changing plan on April 30, 1916, in order to save on coal usage, and on May 21, Britain followed, as World War One was underway.

The Summer Time Act of 1916 was passed by Parliament and the first day of British summer was reported as May 21, 1916.

Supporters at the time of the proposal argued the scheme would save energy by reducing domestic coal consumption.

They also said it would increase supplies available for manufacturing the war effort during WW1.

It has been in place ever since – despite criticism from some groups.

Remember, if you have any event or item of interest for the village, just send it to webmaster@suttoncumlound.net and our resident website manager will do his best to accomodate you.

All our updates are also published to the village Twitter feed, @SuttonCumLound. So, follow us there for these and other items in and around our area.