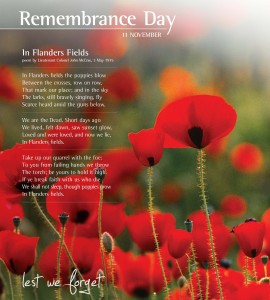 Remembrance Day (also known as Poppy Day or Armistice Day) is a Memorial Day observed in Commonwealth countries since the end of World War I to remember the members of their armed forces who have died in the line of duty. This day, or alternative dates, are also recognised as special days for war remembrances in many non-Commonwealth countries.

In many parts of the world, people observe two consecutive minutes of silence at 11am local time as a sign of respect in the first minute for the roughly 20 million people who died in the war, and in the second minute dedicated to the living left behind, generally understood to be wives, children and families who remained but were deeply affected by the conflict. This gesture of respect was suggested by Edward George Honey in a letter to a British newspaper, although Wellesley Tudor Pole had established two ceremonial periods of remembrance based on events in 1917.

The day was specifically dedicated by King George V on 7th November 1919 as a day of remembrance for members of the armed forces who were killed during World War I. The Initial or Very First Armistice Day was held at Buckingham Palace commencing with King George V hosting a “Banquet in Honour of The President of the French Republic” during the evening hours of 10th November 1919. The First Official Armistice Day was subsequently held on the Grounds of Buckingham Palace on the Morning of 11th November 1919. This would set the trend for a day of Remembrance for decades to come.

In the United Kingdom, beginning in 1939, the two-minute silence was moved to the Sunday nearest to 11th November in order not to interfere with wartime production should 11th November fall on a weekday. After the end of World War II, most Armistice Day events were moved to the nearest Sunday and began to commemorate both World Wars. The change was made in many Commonwealth countries, as well as the United Kingdom, and the new commemoration was named Remembrance Sunday or Remembrance Day. Both Armistice Day and Remembrance Sunday are now commemorated formally in the UK. In recent years Armistice Day has become increasingly recognised, and many people now attend the 11am ceremony at the Cenotaph in London – an event organised by The Western Front Association, a UK charity dedicated to perpetuating the memory of those who served in the First World War.

The red remembrance poppy has become a familiar emblem of Remembrance Day due to the poem “In Flanders Fields” written by Lieutenant Colonel John McCrae on the 3rd May 1915. These poppies bloomed across some of the worst battlefields of Flanders in World War I, their brilliant red colour an appropriate symbol for the blood spilled in the war.

In Flanders fields the poppies blow
Between the crosses, row on row,
That mark our place; and in the sky
The larks, still bravely singing, fly
Scarce heard amid the guns below.

We are the Dead. Short days ago
We lived, felt dawn, saw sunset glow,
Loved and were loved, and now we lie
In Flanders fields.

Take up your quarrel with the foe:
To you from failing hands we throw
The torch; be yours to hold it high.
If ye break faith with us who die
We shall not sleep, though poppies grow
In Flanders fields.

See a video of In Flanders Fields Song and Slideshow below

Don’t forget, if you have any event or item of interest for the village, just email it to webmaster@suttoncumlound.net and our resident website monitor will do his best to accommodate you. All posts go out to our increasing list of email update subscribers as soon as they’re published.

Devolution: have your say on the future of our region A public consultation on devolution proposals ...
View on Facebook